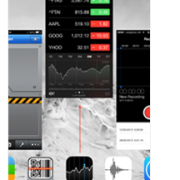 As more and more of our clients are using iPhones, iPads and other iOS devices, we want to blog about closing Apps in iOS.

Your smartphone or iPad is a hardworking tool, capable of literally almost anything, including of course running our latest free App – you can get that here

Telephone calls happen to be a small part of what most of us use our Apple devices for these days. More frequent use includes emails, Apps, directions, purchasing equipment and thousands of other tasks. After carrying out hundreds of App demonstrations with financial services firms, it has become clear that many users were unaware that their phone was running Apps in the background.

What many people do not realise is that by allowing these Apps (sometimes twenty or more) to run in the background, they are wasting a huge amount of the device’s processing speed and battery life. No wonder they have to keep recharging.

Some users we spoke to had never closed a single App – ever! That meant they were running a high number of Apps, slowing their device down and reducing its battery life and length.

How to close an App in iOS and later OSes: 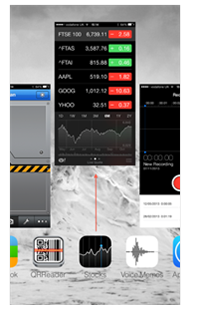 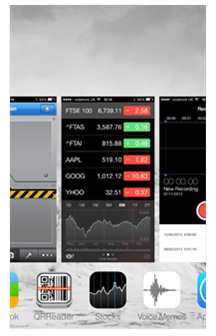 To close down those sneaky background Apps in the new operating system is much easier than in previous versions. The first step is to access the task bar on the device.

If you are used to previous versions of IOS, then the first thing you might notice is that the home button no longer shows you a drawer with the icons of open Apps.  Instead you will see ‘cards’ that contain a screenshot of each of your open Apps.  Beneath these card images you will see the App icon. In the example to the left you can see 3 open Apps.

You can swipe in either direction between the Apps.  Swiping all the way to the left will take you to the image of your home screen, whilst going to the right reveals more open Apps (if you have more open).

Tapping on the App image will then launch or return you to that App.

To close the App (or force an App to close that’s unresponsive) is actually very simple, although it isn’t immediately obvious.

All you need to do is place your finger on the image of the App you wish to close and drag your finger upwards (forwards).  This will drag the App upwards on your screen and it will fly off and close.

This simple process will dramatically speed up the iPhone, iPad or device and extend the time it will run on a single charge.