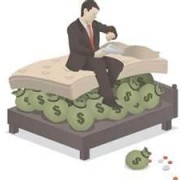 People leaving their pension savings in cash could be putting their retirement plans at risk.

Since new pension freedoms were introduced in April, savers no longer have to invest their pension pot in an annuity, but can take it in a variety of ways.

An in-depth survey by Royal London of its own customers who had exercised their freedom since May found that 69% of them took the whole pot as a lump sum; worryingly, 26% of these are saving it all in a building society or bank account, where they will receive little or no interest.¹

Some people may be cashing in their pensions just because they can, or because they like the idea of having the money on tap in a bank account. “For very small pots this may be understandable, but for larger pots the impact of tax and, potentially, inflation can be considerable,” comments Ian Price of St. James’s Place. “What worries me is that people may fail to appreciate the consequences of moving money from a tax-advantaged wrapper to a taxed one.”

It may be that those withdrawing their pension savings simply lack the confidence in their own financial acumen to make the right decision about how to fund their retirement and that, metaphorically, ‘stashing it under the mattress’ is the safest option. But, by doing just that, they increase the risk of inflation depleting the spending power of their money, or worse still, incurring significant tax charges by reinvesting – and all without actually gaining any additional benefit that is not already available within their pension.

“Much of the talk around the new freedoms has focused on being free to get out of your pension, but equally you can have freedom while you’re still in your pension,” adds Price. “Rather than seeing it as ‘open season’ for your money, think of it more as the opportunity to utilise your pension fund in the most advantageous way possible. And to do so, seeking expert advice is essential.”